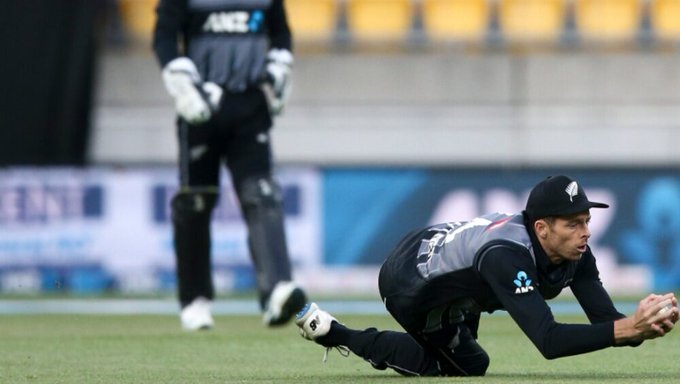 In the absence of this deputy Rohit Sharma, who was rested in the game, the Indian batting mainstay had to walk into the middle pretty early as opener Sanju Samson was dismissed in the second over.

In the fifth over that was bowled by Hamish Bennett, Kohli looked to work the short-pitched delivery through the on-side but he ended up getting a leading edge towards cover. An alert Mitchell Santner charged towards the ball and dived in the air towards his right and held on to the ball. Kohli was also stunned with Santner’s effort inside the circle.

Santer, who dropped a sitter in the previous game to give a reprieve to Ravindra Jadeja, was excellent in the field in the fourth T20I. The left-arm spinner took three catches in the game and dismissed the likes of Samson, Kohli and KL Rahul.

He also picked up a wicket in the game when he clean bowled Washington Sundar for duck and pushed India further on the back foot.

Earlier in the day, Sanju Samson, who was asked to open the innings as team management rested vice-captain Rohit Sharma, disappointed again with the bat.

Samson came out to open the innings along with in-form KL Rahul after New Zealand’s stand-in captain Tim Southee won the toss and invited Virat Kohli to bat first.

Later, Manish Pandey slammed an unbeaten fifty and helped India post a respectable 165/8 in stipulated 20 overs and gave something for the bowlers to defend.